The Summer Seminar had a good turnout with over 40 students attending including some from other academies.
Mauricio was again accompanied by Dante and Luciano Cristovan from the Roger Gracie Academy. After a slight delay due to the guys being on “Brazilian time” we began with take downs. We then went on to some variations on armbars, triangles and chokes. The details Mauricio covered left both beginners and advanced going away with something new.

Mauricio constantly stressed the importance of good basics. He pointed out that an excellent example of this can be seen by his son’s (Roger Gracie) recent victories in the BJJ 2009 World Championships, where Roger consistently defeated all his opponents in the absolute division using a single technique, a gi choke from the mount.

All in all a good day was had by everyone which was finished off with us taking Mauricio and the guys down to Gun Wharf for lots and lots of Chinese food and a bit of shopping . 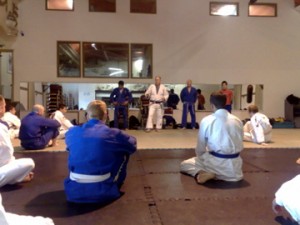 Mauricio introduces himself and friends